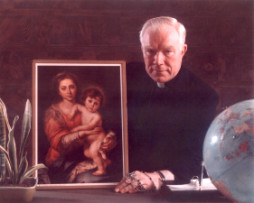 Did you grow up hearing that phrase? I did.  Although, I never knew who coined the phrase.  While searching for something else I found out who said it.  Fr. Patrick Peyton of the Congregation of Holy Cross.  He is currently being considered for beatification.  On June 28th 2011 the tribunal reviewing the possible miracle for his beatification had its closing liturgy in Albany, NY USA.  The miracle attributed to his intercession was a man cured of multiple organ failure.
Father Peyton was born in Ireland in 1909.  He grew up in a devote family and prayed the Holy Rosary with his parents and siblings.  At the age of 19 he moved to Scranton Pa USA.  Four years later he entered the seminary. While still a seminarian he became very ill and was diagnosed with advanced tuberculosis.  Patrick began to pray to the Blessed Mother and miraculously all illness left him and the patches on his lung disappeared.  Feeling that his healing was through the intercession of his heavenly mother. Patrick then committed his life to the Blessed Mother. After becoming a priest in 1941 he was assigned as Chaplain of the Holy Cross Brothers in Albany NY and started a group called the Family Rosary.  He began a lifelong mission to advocate for the family and spread devotion to the Rosary.    He felt that one strengthened the other.  He became known as “The Rosary Priest”.


He was a pioneer in using radio and film to spread these messages and inspired many Hollywood actors to help him such as Bob Hope, Natale Wood, Jimmy Stewart, Bing Crosby and Grace Kelly to name a few. He traveled the world leading “Rosary Rallies” which attracted crowds in the millions.  In 1992 he passed away leaving a legacy of more than 600 radio and TV programs spreading his message.
Reading about Father Peyton a feeling comes that stumbling upon this great man was no accident.  The work the children’s rosary is doing is an extension of the early work he did.  We are continuing where he left off.  Fr. Peyton also said, “A world at prayer is a world at peace”.
Tonight I would like to invite Fr. Peyton to join the children’s rosary and pray with us and for us.  The following novena will also be said for the next 9 days asking for his intercession.
Novena to Fr. Patrick Peyton

Fr. Peyton you spent your life on earth working for families.  You brought the rosary into homes and into hearts.  Through your devotion to the Blessed Mother many families came to seek the intercession of Our Lady.  We ask for your prayers that our family will become a chapel where we pray.  Obtain for us the grace that every family will become a prayer group in front of the Cross.  May we experience a renewal of family prayer and may that spread across our tired world.  May our broken families be mended with the Love of Our Mother and her Son Jesus.  We humbly ask that you will carry the petitions we hold in our hearts to Our Blessed Mother and Her Son who cares for each one of us.


We pray to Jesus that Fr. Peyton will soon be counted among our Saints. Amen
1 Hail Mary

Posted by The Children's Rosary at 6:46 PM