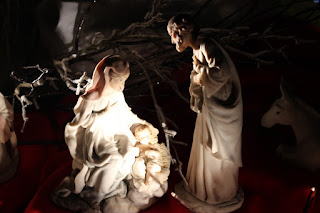 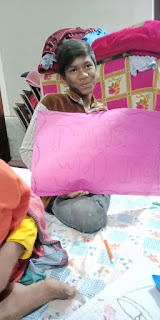 Some of the members of the Children's Rosary sent pictures of them making "Patiently Waiting" signs for their homes. 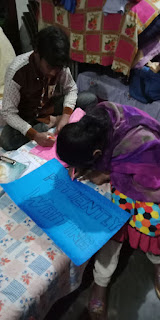 These signs help us to witness where our hearts can be found during Advent. We invite individuals to replace the patiently waiting signs with ones that reach "Christ is Born" on Christmas. 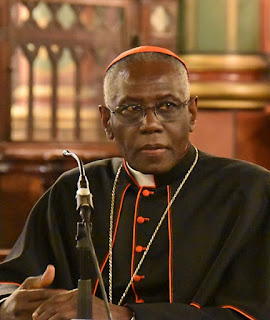 We are excited to share a recent communication we received from Robert Cardinal Sarah:

"The graces that are so evidently springing from the Children's Rosary through the powerful intercession of Our Lady give me great hope not only for Africa, but for the many countries worldwide that you are engaged in and where the Lord wishes you to venture. Please know of my fervent support for your apostolate. And please pray for me and my mission in service to the Church and our Holy Father." ~ Robert Cardinal Sarah

Image source: wikimedia commons
Posted by The Children's Rosary at 5:58 AM No comments: 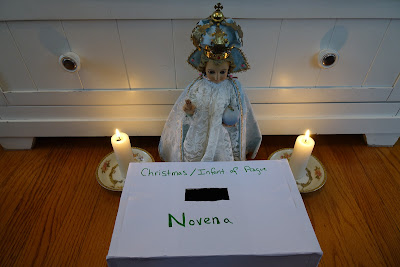 Christmas Novena
Prayer to the Miraculous Infant of Prague

O Divine Infant Jesus, Who said: "Ask and you shall receive, seek and you shall find, knock and it shall be opened to you." Through the intercession of Mary, Your Most Holy Mother, I knock, I seek, I ask that my prayer be granted.

O Divine Infant Jesus, Who said: "Unless you become like little children, you will not enter the Kingdom of Heaven." Grant me the simplicity and wonder, the tenderness and gentleness of a child. Fill me with innocence, hope and love. Grant me the grace that I need.

O Divine Infant Jesus, help me know how close You are to me and how powerful is Your embrace. Help me to trust that You hold the whole world in Your hand. I place my every need and care in Your hands. I ask that you fulfill my request according to Your holy will. 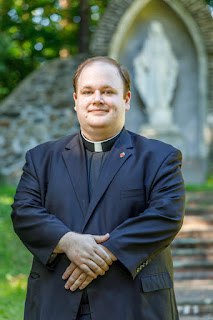 We have been periodically featuring different seminarians on the first of the month by inviting them to share something of themselves - a beautiful sharing of faith and love of Our Lord. This month we will be featuring Christopher Kelley.

I am currently a seminarian on Pastoral Year and in formation with the Archdiocese of Hartford, CT. Yet my journey so far has been rather unconventional, having grown up in a home where we didn’t go to Church all that often – in large part because my father had passed away when I was young from cancer, and my mother would eventually also pass from breast cancer – and my own practice of the faith disappeared in high school following my mom’s passing. It wasn’t until I was in college, in a philosophy class of all places, that the dying embers of my faith slowly began to be reignited, eventually leading me to return to the faith and become Confirmed at the end of my freshman year of College.
Shortly after returning to the Church, I began to consider the vocation to the priesthood more regularly, recalling the words of invitation a priest had given for me to think about in high school, however, I eventually decided by the end of college to hold off, instead preferring to just simply find a job and work upon graduating. While in Graduate School working toward a Master of Public Administration degree focusing on City Management, I went on a Men’s Retreat my home parish put on, which brought me to a deeper experience of our Lord and the invitation to discern became much stronger, prompting me to become more involved in my parish and discern in earnest.
In the following months, my devotion to the Rosary and the guidance of the Blessed Mother became crucial to my discernment, my daily praying of the Rosary before Mass began with the small, but faithful, group of parishioners who would show up each morning to pray the Chaplet for the day. The presence of the Blessed Mother in my prayer life eventually led me to a greater insight and appreciation of Christ’s suffering in the Sorrowful Mysteries, and a greater appreciation for His presence in the hardest moments of my life even though I could not always see it.
A few months after finishing my M.P.A., I was accepted into the formation program for my Archdiocese and began the deeper work of praying, discerning, and ultimately, of being formed into a better Christian Man – and God-Willing, a future priest of Jesus Christ.

We are grateful to Christopher Kelley for sharing his beautiful vocation story. We humbly ask that you say a Hail Mary for Christopher and his vocation now and consider including him in your future prayers. Thank you.
Other Posts You May Enjoy: