Prayer to Obtain a Favor through the Intercession of Servant of God Fr. Capodanno:
May God who has offered healing and strength through the hands of His only Son, Our Lord, and through Christ’s many servants grant me the favor of His healing and through the intercession of His servant, Fr. Vincent Capodanno, priest, missionary, and chaplain, who always sought to heal and comfort the wounded and dying on the field of battle. May I be granted this request on my own field of battle I pray in the name of the Father, and of the Son and of the Holy Spirit. Amen.
IMPRIMATUR
+Most Rev. Edwin F. O'Brien
Archbishop, Archdiocese for the Military Services, USA

A friend at Church had recently seen a program on Father Vincent Capodanno and recommended a documentary about him called the Grunt Padre.  I was intrigued by this heroic missionary and Chaplain from New York and wanted to learn more.  A visit to the Vincent Capadonno website brought the story of a wonderful priest a true inspiration.  The children and I ordered the documentary and after watching the story of his life we decided we wanted pray a novena to Fr. Capodonno and felt that his birthday February 13th would be a good day to start it.

Included below is a statement given about Fr. Capadonno obtained from http://www.vincentcapodanno.org 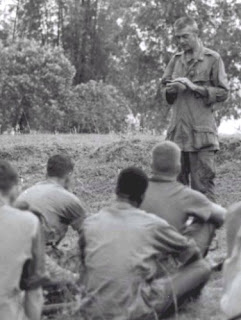 Over here [Vietnam] there is a written policy that if you get three Purple Hearts you go home within 48 hours. On Labor Day, our battalion ran into a world of trouble- when Father C. (Capodanno) arrived on the scene it was 500 Marines against 2500 North Vietnamese Army Regulars. Needless to say, we were constantly on the verge of being completely overrun and the Marines on several occasions had to advance in a retrograde movement. This left the dead and wounded outside the perimeter as the Marines slowly withdrew. Casualties were running high and Father C. had his work cut out for him. Early in the day, he was shot through the right hand which all but shattered his hand- one corpsman patched him up and tried to med evac him but Father C declined saying he had work to do. A few hours later, a mortar landed near him and left his right arm in shreds hanging from his side. Once again, he was patched up and once again he refused evacuation. There he was, moving slowly from wounded to dead to wounded using his left arm to support his right as he gave absolution or Last Rites, when he suddenly spied a corpsman get knocked down by the burst of an automatic weapon. The corpsman was shot in the leg and couldn't move and understandably panicked. Fr. C. ran out to him and positioned himself between the injured boy and the automatic weapon. Suddenly, the weapon opened up again and this time riddled Father C. from the back of his head to the base of his spine- and with his third Purple Heart of the day- Father C. went home.