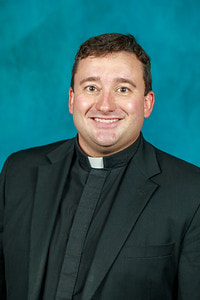 We have been periodically featuring different seminarians on the first of the month by inviting them to share something of themselves - a beautiful sharing of faith and love of Our Lord. This month we will be featuring Josh Wilbur.

There was a boy so sure of what he wanted to be when he grew up that nobody could convince him to consider any other options.  His mind was made up.  He wanted to be a music teacher someday; to teach students how to play all kinds of different musical instruments, to lead a band that would be the envy of every music director for miles around.  Just the thought of it made him eager for that time to come.  He would earn the respect of everyone around and would be hailed as one of the greatest teachers ever to walk the hallways of whichever school was lucky enough to have him.  As the years went on, everything seemed to be pointing in the direction toward that boy's goal.  He excelled in his musical studies throughout high school and was accepted into a prestigious music school for college.  His studies at college only made him all the more sure that his childhood dream of being a teacher was the perfect fit for him.  After graduating college, his dream finally became a reality when he accepted a position as an elementary school music teacher.  It had finally happened; he had his own music classroom with his own name outside the door.  His work of helping children discover music didn't feel like a job, it felt like a way of life.  Everything was going perfectly, or so he thought.  After a few years of teaching, deep in the back of his mind, there was something saying to him: "this isn't it...there's more."  That recurring thought was confusing to him, especially since things were going so well.  He was happy.  This was what he always wanted to do.  How could he possibly do anything else?  He found himself in prayer, saying to God:  "this is what I want to do, what is this nagging thought?"  After spending months and months agonizing over it, he began to realize that perhaps his focus had always been on what HE wanted for HIMSELF, rather than on what God's desire was for him.
You probably have realized that the dotry of the boy who just wanted to be a music teacher is my own story.  I am so grateful that God put the right people in my life and the graces to listen in quiet prayer for what He really wanted of me.  After dragging my feet for years because I was doing what I always wanted to do, I stopped to consider what God's true desire was for me; and believe me, I never thought it would lead me to study in the seminary.  However, after a great deal of discernment, guidance from some wonderful people, and now in my fifth year of formation, I can confidently say that I feel absolutely at peace with God's will.
Consider spending a few extra moments in prayer for the young men that you know, even for those you don't, and possibly even yourself.  For so many of us in seminary, all it took was a simple suggestion from someone to consider a call to the priesthood.  Even if the suggestion isn't received openly at first, God can work with the seeds that we plant; even when some plants bloom faster than others!

Josh Wilbur's story is one that is close to home. He was a music teacher at St. Thomas the Apostle elementary school. Our son in kindergarten was a student of Mr. Wilbur.  So it was with great joy that shortly after the Children's Rosary began at St. Thomas that we heard Mr. Wilbur was entering the seminary. We were so happy for him.  The time has gone by so fast and now his ordination will be in June.

We hope that those of you reading this will keep Josh Wilbur in your prayers.  If we want holy priests we need to pray for them. They are undertaking a difficult journey for Our Lord and souls. We thank them for their, "Yes".

Don't forget to unify prayers with the children during their meetings. A schedule of meetings is present on our website. By clicking "Join in Prayer" you can add your gold flashing light to our View from Heaven map.

Posted by The Children's Rosary at 5:58 PM