The Lord is Kind and Merciful

"The Lord is Kind and Merciful"(Psalm 103)
The gospel from yesterday was the parable of the tenants.  The owner of the vineyard first sends his servants to collect the fruit at harvest time.  When they are beaten, stoned and killed he sends his son.  He too is killed. The gospel from today was the parable of the prodigal son. In the first parable the apostles respond to the violent treatment of the owners son by condemnation and advise that the owner should “bring those wretches to a wretched end”(Matthew 21:41).  In the second parable when the older son, who has squandered the inheritance from his father, returns home his brother believes he should not be accepted home.  Jesus does not share the apostles and younger sons desire for judgement and retribution. Even though they are justly due for such treatment The Lord choses Mercy.

It is a difficult thing not to judge.  Just the other day I found myself falling into just that trap.  Desiring to buy some fresh homemade bread at a small store near our house the children and my husband and I walked into town.  I had noticed the previous day when we stopped in and they were sold out of bread that they were open until 6PM.  We arrived at the store at 5PM to find the lights out and a small sign in the window reading closed.  On the door inscribed were the hours: open 10-6.  We wondered if they had run to the bank and waited a few minutes.  Disappointed we all walked home empty handed.  My husband and I began to talk.  Things were said like what kind of operation would have posted hours and then not be there.  It was an unseasonably warm day and we wondered if the owner had just left early to enjoy the day.  Our sentiments were not one of understanding but judgement on the situation.

Two days later we again walked into town to try and buy bread.  I called ahead but no one answered.  My mind again was running... what is this store that no one answers the phone.  Upon entering the store now open, a man ran out from the back.  He was visibly flustered.  His body seemed to have spastic ticks.  We asked for some bread and he mumbled that there had been a big problem yesterday.  He took a loaf from the basket. I mentioned trying to come to the store at 5PM two days earlier and he said it was related to the same problem.  He was not forthcoming as to what the problem had been.  I began to look around and noticed that the refrigerators which used to be filled with frozen prepared food were empty.  As my mind was filling in the missing pieces the man was fumbling with my money looking in the register.  He was looking for change and not finding any he told me to pay the next time.  We could clearly see this poor man was overwhelmed, suffering, and embarrassed.  We all began to feel so bad for the situation and then I remembered how much bad will I had felt for whoever was responsible for the store not being open the other night.  Oh, I had fallen into judging again.

The words from the gospel only a week earlier now come to mind, “Judge not and you will not be judged”(Luke 6:37). Every day at Mass I hope that others will not judge me.  I have a genetic problem with my joints which prohibits me from kneeling.    I imagine that people look at me and see what looks like a healthy young person.  I hope they are not judging me that I am not reverent enough to kneel at the appropriate time. Over and over again I am confronted with a reality different then I had expected.  Therefore we must heed our Lord’s direction and not judge and leave the judging to Our Father in Heaven.  Thankfully, as the entrance psalm from Mass today said, "The Lord is kind and full of compassion and slow to anger". 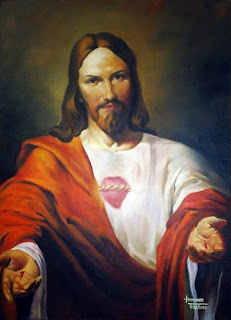 Not only is the Lord forgiving and merciful He is patient and waits for us to turn to Him. Jesus tells Saint Faustina in her diary, "Tell sinners that I am always waiting for them, that I listen intently to the beating of their heart...My heart rejoices when they return to me."(diary 1728)
Posted by The Children's Rosary at 6:09 PM