Mary Mediatrix of All Blessings

As the Month of August, which is dedicated to the Immaculate Heart of Mary, comes to a close I felt the urge to reflect on Our Blessed Mother as Channel of all Blessings from Our Lord. 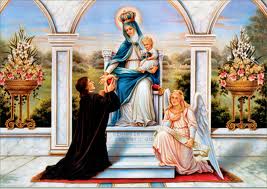 St. Louis de Montfort wrote in the Treatis on True Devotion to the Blessed Virgin:

24. "God the Son imparted to His mother all that he gained by His life and death, namely, His infinite merits and His eminent virtues. He made her the treasurer of all his Father had given Him as heritage. Through her He applies His merits to his members and through her He transmits His virtues and distributes His graces. 25. She is His mystical channel, His aqueduct, through which He causes His mercies to flow gently and abundantly.God the Holy Spirit entrusted His wondrous gifts to Mary, His faithful spouse, and chose her as the dispenser of all He possesses, so that she distributes all His gifts and graces to whom she wills, as much as she wills, how she wills and when she wills. No heavenly gift is given to men which does not pass through her virginal hands. Such indeed is the will of God, who has decreed that we should have all things through Mary, so that, making herself poor and lowly, and hiding herself in the depths of nothingness during her whole life, she might be enriched, exalted and honoured by almighty God. Such are the views of the Church and the early Fathers."
Posted by The Children's Rosary at 3:41 PM

Email ThisBlogThis!Share to TwitterShare to FacebookShare to Pinterest
Labels: Blessings, Our Blessed Mother