The Man of the Eight Beatitiudes: Bl Pier Giorgio Frassati 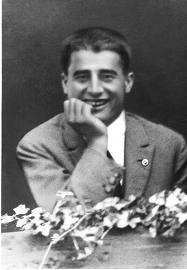 Pier Giorgio Frassati was born in Turin, Italy on April 6, 1901. He lived only to the age of 24 just like St. Therese of Lisieux.  He was born into a prestigious family.   However he spent a great deal of time with the poor, serving them and giving of what he had.  He also was an avid outdoorsmen and found enjoyment from mountain climbing.

In the summer of 1925, Pier Giorgio contracted poliomyelitis, which doctors later speculated he caught from the sick whom he tended. After six days of terrible suffering Pier Giorgio died at the age of 24 on July 4, 1925.

On March 31, 1981 His mortal remains, were found completely intact and incorrupt upon their exhumation. They were transferred from the family tomb in Pollone to the cathedral in Turin.

His favorite writings in the Bible were those of St. Paul, especially
“Love is patient and kind; love is not jealous or boastful;
it is not arrogant or rude. Love does not insist on its own way; it is not irritable or resentful;
it does not rejoice at wrong, but rejoices in the right.
Love bears all things, believes all things,
hopes all things, endures all things.
Love never ends”
(1 Corinthians 13: 4 – 8)

Always be ready to give an explanation to anyone who asks you for a reason for your hope" (1 Peter 3:15).
In our century, Pier Giorgio Frassati incarnated these words of St. Peter in his own life. The power of the Spirit of Truth, united to Christ, made him a modern witness to the hope which springs from the Gospel and to the grace of salvation which works in human hearts. Thus he became a living witness and courageous defender of this hope in the name of Christian youth of the twentieth century.
Faith and charity, the true driving forces of his existence, made him active and diligent in the milieu in which he lived, in his family and school, in the university and society; they transformed him into a joyful, enthusiastic apostle of Christ, a passionate follower of his message and charity.
The secret of his apostolic zeal and holiness is to be sought in the ascetical and spiritual journey which he traveled; in prayer, in persevering adoration, even at night, of the Blessed Sacrament, in his thirst for the Word of God, which he sought in Biblical texts; in the peaceful acceptance of life's difficulties, in family life as well; in chastity lived as a cheerful, uncompromising discipline; in his daily love of silence and life's "ordinariness."
It is precisely in these factors that we are given to understand the deep well-spring of his spiritual vitality.
Indeed, it is through the Eucharist that Christ communicates his Spirit; it is through listening to the word that the readiness to welcome others grows, and it is also through prayerful abandonment to God's will that life's great decisions mature.
Only by adoring God who is present in his or her own heart can the baptized Christian respond to the person who "asks you for a reason for your hope" (1 Pt 3:15). And the young Frassati knew it, felt it, lived it. In his life, faith was fused with charity: firm in faith and active in charity, because without works, faith is dead (cf. James 2:20).
Certainly, at a superficial glance, Frassati's lifestyle, that of a modern young man who was full of life, does not present anything out of the ordinary. This, however, is the originality of his virtue, which invites us to reflect upon it and impels us to imitate it.
In him faith and daily events are harmoniously fused, so that adherence to the Gospel is translated into loving care for the poor and the needy in a continual crescendo until the very last days of the sickness which led to his death. His love for beauty and art, his passion for sports and mountains, his attention to society's problems did not inhibit his constant relationship with the Absolute. Entirely immersed in the mystery if God and totally dedicated to the constant service of his neighbor: thus we can sum up his earthly life!
He fulfilled his vocation as a lay Christian in many associative and political involvements in a society in ferment, a society which was indifferent and sometimes even hostile to the Church. In this spirit, Pier Giorgio succeeded in giving new impulse to various Catholic movements, which he enthusiastically joined, but especially to Catholic Action, as well as Federation of Italian Catholic University Students [FUCI], in which he found the true gymnasium of his Christian training and the right fields of his apostolate.

In Catholic Action he joyfully and proudly lived his Christian vocation and strove to love Jesus and to see in him the brothers and sisters whom he met on his way or whom he actively sought in their places of suffering, marginalization and isolation, in order to help them feel the warmth of his human solidarity and the supernatural comfort of faith in Christ.

He died young, at the end of a short life, but one which was extraordinarily filled with spiritual fruits, setting out for his "true homeland and singing God's praises."

Today's celebration invites all of us to receive the message which Pier Giorgio Frassati is sending to the men and women of our day, but especially to you young people, who want to make a concrete contribution to the spiritual renewal of our world, which sometimes seems to be falling apart and wasting away because of a lack of ideals.

By his example he proclaims that a life lived in Christ's Spirit, the Spirit of the Beatitudes, is "blessed", and that only the person who becomes a "man or woman of the Beatitudes" can succeed in communicating love and peace to others. He repeats that it is really worth giving up everything to serve the Lord. He testifies that holiness is possible for everyone, and that only the revolution of charity can enkindle the hope of a better future in the hearts of people.
Yes, "tremendous are the deeds of the Lord". Shout joyfully to God all you on earth" (Ps 66:1-3). The verse of the Psalm resound in this Sunday liturgy as a living echo of young Frassati's soul. Indeed, we all know how much he loved the world God created! "Come and see the works of God" (Ps 65/66:5): this is also an invitation which we receive from his young soul and which is particularly addressed to young people. Come and see God's "tremendous deeds among men" (ibid.).

Tremendous deeds among men and women! Human eyes -- young, sensitive eyes -- must be able to admire God's work in the external, visible world. The eyes of the spirit must be able to turn from this external, visible world to the inner, invisible one: thus they can reveal to others the realm of the spirit in which the light of the Word that enlightens every person is reflected (cf. Jn 1:9). In this light the Spirit of Truth acts.

This is the "inner" person. This is how Pier Giorgio appears to us. Indeed, his entire life seems to sum up Christ's words which we find in John's Gospel: "Whoever loves me will keep my word, and my Father will love him, and we will come and make our dwelling with him" (Jn 14:23). This is the "inner" person loved by the Father, loved because he or she has loved much!

Is love not possibly what is most needed in our twentieth century, at its beginning, as well as at its end? Is it perhaps not true that the only thing that lasts, without ever losing its validity, is the fact that a person "has loved"?

He left this world rather young, but he made a mark upon our entire century, and not only on our century. He left this world, but in the Easter power of his Baptism, he can say to everyone, especially to the young generations of today and tomorrow:

These words were spoken by Jesus Christ when he took leave of his Apostles before undergoing his Passion. I like to think of them as forming on the lips of our new Blessed himself as a persuasive invitation to live from Christ and in Christ. This invitation is still valid, it is valid today as well, especially for today's young people, valid for everyone. It is a valid invitation which Pier Giorgio Frassati has left for us.

Posted by The Children's Rosary at 1:42 PM