Feast of St. Bridget of Sweden 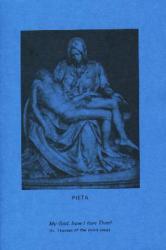 Growing up I have vivid memories of my mother always carrying around a blue pieta book.  At night when I went to bed she stayed up with her blue book.  I could see she was tired many nights but she said she would rather stay up and say the St. Bridget prayers every night.  A few times I looked at the prayers which went on for several pages and read them.  It seemed so overwhelming to me as a child to say this every day.  Years later I remembered that pieta book that my mother used to carry and decided to get one for myself.
I found it to be such a treasure with short prayers that one can say while waiting at an appointment or as I like to do on my walk to Church.  The little pieta book became a must have where ever I went along with my rosaries.  I again saw these St. Bridget prayers but seemed to pass over them for a few years.  Then last summer on the Feast of St. Bridget I looked at these prayers again and they did not seem so daunting.  Instead they seemed inviting.
The Fifteen St. Bridget prayers honor the blows that Jesus suffered during His passion.  The Lord Jesus shared with St. Bridget these prayers and asked that with each prayer an Our Father and Hail Mary should be said.  After 1 year every one of the 5480 blows on His body would be honored.

Yesterday the last prayers were said and Jesus’ last wounds were honored.  The Lord had a special gift in store.  I had not even realized when I woke up in the morning that it was the last day but the Lord through His hand guided me to a deeper appreciation of Jesus Crucified.  At the 8 AM Sunday Mass a mission priest said Mass.  His name was Fr. Larry Tucker.  He is a bilingual missionary priest in the Society of Our Lady of the Most Holy Trinity.  He has served in New York, South Texas, Mexico, Belize, Guatemala and England.  As soon as he began to say Mass I could feel the tenderness and deep love that he had for the Holy Eucharist.  During Mass I was aware of waves of deep love entering my heart.  They were so strong and full and were directed toward the priest.  I thought for a moment that this priest must be very dear to Our Lady.  As the thought entered my mind my heart was overcome with even more love.  I then became aware that I was being allowed to feel love passing from Our Lord and Our Lady to this gentle, peaceful priest.  At the moment of consecration Fr. Tucker held up the Host.  The bells were rung and then they stopped.  However he did not put the Eucharist down.  He held it there for what felt like minutes.  As he put it down he bowed and likewise I bowed in my place.  When I pulled my body up he still was not visible.  He was still on his knees.  At the end of Mass we had an opportunity to speak to Fr. Tucker.  We spoke about the children’s rosary and he shared with the children his experiences and how the Lord called him to be a priest.  As we were leaving he asked us to go to his car and gave us a very special Bible.  It had been a family Bible for many years, one which he had received as a gift. Fr. Tucker in his generosity decided to give this precious gift to us.  He also gave us a book called “The Prayer of Jesus Crucified” which he himself wrote.  As the children and I walked home from Church I had a strong feeling we had been given a very special gift by meeting Fr. Tucker.  To witness the love of one soul for Christ Crucified and then feel the response from Our Lord in your heart was life changing.  It was a taste of the deep relationship that can exist between a soul and Our Lord.  A Love that is passed back and forth.  To feel that as an observer created a thirst in my own soul to know Jesus in that way.  It was a gift from Jesus but also an invitation to come closer,  to love Him as Christ Crucified. Fr. Tucker’s book is written simply almost as a child would speak.  I would recommend this book to everyone.  It takes only 10-15 minutes to read and is crystal clear.  As the hour is getting late and I have many more prayers to say before bed I will leave this chapter of Fr. Tucker on hold with more to come in the future.
Today is the Feast of St. Bridget and I feel in my heart that I would like to begin the year again honoring Jesus’ wounds through the prayers of St. Bridget.  I pray this night that you reading this post will be moved to begin the St. Bridget prayers.  I pray that the Spirit of Prayer will descend on your Heart as you read this and there will be a overwhelming desire to begin these St. Bridget Prayers.  For as St. Bonaventure said: “Let him who desires to attain union with God keep the eyes of his soul ever fixed on Him who hangs dying on the Cross.  It’s from those wounds of the Savior that man draws power to suffer not merely with patience but with joy”.
15 Prayers of St. Bridget
Posted by The Children's Rosary at 7:38 PM