St. Rocco Protector Against Epidemics - Pray For Us 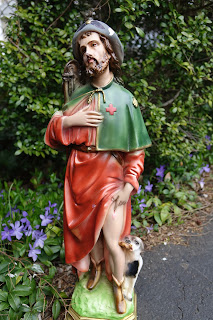 St. Rocco was born in Montpellier, France in 1340 A.D. His was a miraculous birth. After his mother prayed to the Blessed Virgin Mary, she conceived Rocco despite being thought to be barren. Rocco bore a red cross on his chest which appeared at his birth and remained for the rest of his life. St. Rocco at a young age developed a strong devotion to Our Blessed Mother. When his father died, Rocco was appointed governor of Montpellier but decided to leave this high position and depart instead for Rome. He journeyed there as a humble and poor pilgrim. There he cared for people with the plague. Miraculous healings were attributed to him during that time.  He ultimately contracted the plague himself. As a result, he was banished from the city and lived in a cave. It is reported that a dog faithfully brought him bread which helped him to survive. After a stay and cure at the castle of the kind Count Gothard Pallastrelli, (the owner of the dog) St. Rocco returned to Montpellier where he was imprisoned unfairly and erroneously thought to be an espionage agent. He languished in prison for five years before his death in 1378 A.D. On the day of his death, a bluish light emanated from his body. The governor, his uncle, realized that Rocco was his nephew because of the cross found on his breast.

St. Rocco is venerated in the Catholic Church as protector against the plague and contagious diseases. St. Rocco's feast is August 16th. During this time of pandemic, we seek his powerful intercession.

Dear St. Rocco, please intercede for us before Our Lord Jesus. May we have unwavering trust in God no matter the trials or illnesses that may befall us. May our hearts be open with mercy for those less fortunate and suffering around us. Following in the example you gave, St. Rocco, may we take up our cross and selflessly follow Our Lord. May we also find recourse to the intercession of Our Blessed Mother as you did since childhood. Amen.

Photo credit: The photo above is of a statue of St. Rocco given to our family some years ago by a missionary priest.

Don't forget to unify prayers with the children during their meetings. A schedule of meetings is present on our website. By clicking "Join in Prayer" you can add your gold flashing light to our View from Heaven map.
CLICK HERE TO WATCH OUR NEW VIDEO:
A VIEW FROM HEAVEN
UNA PERSPECTIVA DESDE EL CIELO
For more information about the Children's Rosary visit our website: www.childrensrosary.org
Visite nuestro sitio web en español para obtener más información: www.rosariodeninos.org
Pour plus d'informations sur le Rosaire des Enfants, visitez notre site Web:www.rosairedesenfants.org

Posted by The Children's Rosary at 8:06 PM