Under the Care of Our Heavenly Father


Today is Father's Day in the United States.  It is a time for families to come together and thank and honor our fathers.  Despite this being a secular holiday it would seem that many pieces would come together to point not only to our earthly fathers but also Our Heavenly One as well.  Several weeks ago, Fr. Apostoli called with an invitation to feature the Children's Rosary on his show: Sunday Night Prime on EWTN.  Fr. Apostoli is also the Vice-Postulator for Archbishop Fulton Sheen's Cause for Canonization.  Fr. Apostoli was a speaker at the Little Audrey Santo Conference and had been present during our Children's Rosary there.  He took several of our books and was very excited about helping the movement spread.

One of my first questions, when he called,  was could parents and children be on the show.  He really liked the idea but wasn't sure how that would work as the NY set is very small and only set up for an interview.  However, he said he would check about this.  Later he called back and left a message that the producers did not think it would be possible for the children to be filmed on the set but that if there were pictures and a DVD of the children praying this could be sent to the editors at EWTN in AL and integrated into the program. 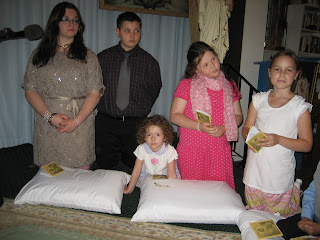 Our Lord had in His infinite Mercy already provided the means for a DVD to be made.  On Divine Mercy Sunday, Mary Alice and Fr. Bill McCarthy happened to visit St. Thomas the Apostle Church to participate in our afternoon reconciliation and Mass.  In speaking to them that afternoon they offered that if the Children’s Rosary ever had need of a video they had a facility at My Father’s House in Moodus, CT.   At the time I thought it a wonderful and generous offer but did not see an immediate need for such a DVD.  However, after hearing Fr. Apostoli’s message their offer came right to mind. 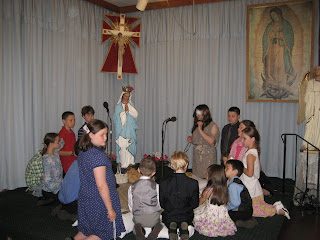 After contacting Fr. Bill and Mary Alice again they graciously accepted our request for their help in creating a DVD of a Children’s Rosary.  While at first Father's Day seemed like an unlikely date to hold a Children’s Rosary through a series of conflicts it became clear that this would be the date. However, as things have unfolded it would seem to be a tremendous blessing meant in a special way for our earthly father’s and an acknowledgement of the graces being poured down from Our Heavenly Father. Even the location of the taping provided on Divine Mercy Sunday is dedicated to Our Father.  The charism of My Father’s Retreat House is the Father’s love that is manifested personally to each through Jesus.

Today at My Father's House there was a feeling throughout the day that Our Father had most beautifully taken care of every detail.  One of our members who has a disabled daughter had been ill all week and worried she would not be able to attend. She also needed a ride to the Rosary which was about an hour from her house.  Today just moments before the Mass was to begin in she walked with her daughter.  She would later explain that the most beautiful events had unfolded where she was able to attend a Mass the prior night and another member of our Children's Rosary had offered to give them a ride to the Rosary and Mass today.

Another remarkable event occurred after the Rosary was over and the children all ran back to their families.  As I was beginning to thank everyone for coming I noticed children sitting down with plates of food at the tables in the dining room.  Our planned reception only had juice, pasties and a cupcake rosary.  Seeing the children and families eating what looked like baked ziti with meat sauce and salad I thought how wonderful that Fr. Bill had managed to have food for all of us.  Later I would find out that one of the families that had come to Mass at My Father's House just before the Rosary had felt an inspiration to bring two trays of food and a large salad to Mass.  Debra said she and her husband and children had not been to the Retreat center in months but felt in a strange way called to come today.  Upon hearing at Mass that there was a Children's Rosary she and her family decided to stay.  The need for the food then became clear to her and she set everything out for the children and families.  Debra said seeing the large crowd of at least 30 children and their families she wondered if there would be enough food with the two trays of pasta and one bowl of salad, yet as all the children and families had their fill she returned to her trays to find there was still plenty left over.  Indeed Our Father in Heaven had provided everything needed and more.

The Children so beautifully lead the Rosary today.  As we were gathering all the children together and we were asking which children wanted to lead it became so beautifully clear that a perfect number of groups of children where assembled to lead each decade.  As the children took turns leading there seemed to always be a small child with one or two older children just beside to guide and help the younger one.  How beautifullly they all cared for one another and helped each other as some of the children with disabilities made their way to lead or place a rose before the statue of Our Lady.


Another blessed piece of the day was Fr. Bill McCarthy who blessed all the children present and families.  We ended the Rosary by praying for Our Holy Father and asking the children to extend their hands and pray for all those present and all those unifying their prayers with them either at that moment or in the future.

In a special way we thank God the Father who sent His Son to us and a Mother to lead us all back to His Heavenly Embrace. Amen.

Posted by The Children's Rosary at 7:16 PM

Email ThisBlogThis!Share to TwitterShare to FacebookShare to Pinterest
Labels: God the Father