A Beautfiul Story of Prayer to Our Lady

Today after Mass and the Rosary, I happened to have a lovely conversation with Sean.  He shared with me a beautiful story from Divine Mercy Sunday this past spring.  Sean is blind and walks to church a mile each day.  He follows the same route and rarely deviates from it.  He enters the Church from the side door leaving his cane outside.  He takes a seat in the chapel closest to the exit.  His passage through the Church is one that is carefully mapped out through years of coming to daily Mass.  Before being introduced to Sean I thought he had a problem with his legs as I had seen him trip several times.  However, once we became friends he shared with me that his legs are like those of an 18 year old, despite his 70 years on earth but the problem is his eyes. 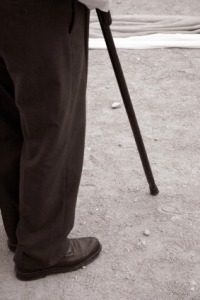 Sean shared that on Divine Mercy Sunday before arriving at the Church he said a prayer to Our Lady.  He asked her to help him go to confession.  There was a special Divine Mercy Celebration planned with adoration of the Blessed Sacrament, confession and veneration of the Divine Mercy Image at our Church.  When Sean entered the chapel he realized there was a large crowd already there.  He took his seat at the end of the row.  He could tell that the seat next to him was empty but the rest of the row was full.  He quickly decided that he would not try and go to confession as there would be no way for his to navigate through the crowd.  As he sat in his seat a women approached and desired to sit in the seat next to him.  As she took her seat she said, "I've been placed here by design."

Sean could not believe the women said this as it was a very odd thing for a person to say.  A few minutes later the women introduced herself and she said she had remembered Sean from the daily Rosary which she used to join some years ago at the parish.  Sean then mentioned something about confession and the women quickly responded that she would be happy to make sure he got to confession.

Now Sean has mentioned this story to me twice.  Once several months ago and again today.  Each time he has mentioned it to me there is a wonderful love for Our Lady that wells up.  It is the wonderful appreciation of a Mother who provides for her children and listens to their prayers.  We are all in some way blind on our journey to her Son.  We need a steady hand to guide us safely to the goal that we seek.  Our Lady beautifully finds her ways of being there right when we need her and in the smallest ways, that only we understand, she shows us that it was her hand all the time steadying us and keeping us on the surest path.  As we were parting Sean said, "if that doesn't get through a thick Irish head I don't know what will."  Sean was speaking about himself as he is from Ireland.  Sean has an extremely deep devotion to Our Lady and felt Our Lady's intercession most beautifully that day.
Posted by The Children's Rosary at 5:37 PM