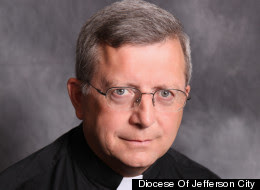 On August 4th Katie Lentz was in a horrible car accident that left her trapped in her car.  Rescuers arrived and were unable to pull her from the damaged car. For hours they struggled to free her.  The area was blocked off and no one was allowed to approach the scene unless they were involved in the rescue.  While Katie was trapped in her car she asked those present to pray with her.  Then rescue workers say they saw a priest approach the car anoint her and quietly step to the side with a rosary in hand and prayed for her.  More efforts proved successful and Katie was pulled from the mangled car.  She was airlifted to a medical center.  When the rescuers later looked for the priest he was gone.  Some speculated it was an angel, a Saint or Jesus himself.  Days later the identity of the priest was revealed when he was reading the National Catholic Register and posted a comment identifying himself as the priest.
He is Father Patrick Dowling from the Diocese of Jefferson City, Missouri.  He was driving when he saw emergency vehicles.  He walked up and spoke to the Sherif who gave him permission to enter the scene.  He went to Katie trapped in the car and anointed her providing absolution and then took up his Rosary to pray for her.  Humbly Fr. Dowling was quick to point out to the Catholic News Agency that he was one of many who were praying for Katie's safety.

This story has taken the attention of many in the US and beyond.  It is a beautiful good samaritan story.  It is a wonderful thing when a person’s actions are so pure that they are mistaken for an angel or Our Lord Himself.  Fr. Dowling was quick to pull out his Rosary which was clearly handy in his pocket.  The Rosary and Our Lady are always leading us to become more like her Son through the frequent time spent with her contemplating Jesus’ life. As Pope John Paul II was fond of quoting from Bl Bartolo Longo “Just as two friends, frequently in each other’s company, tend to develop similar habits, so too, by holding familiar converse with Jesus and the Blessed Virgin, by meditating on the mysteries of the Rosary and by living the same life in Holy Communion, we can become, to the extent of our lowliness, similar to them and can learn from these supreme models a life of humility, poverty, hiddenness, patience and perfection.” We thank Our Lord this day for our wonderful Shepherds who give of themselves and minister to us as Fr. Dowling so beautifully did for Katie.

Posted by The Children's Rosary at 7:04 AM