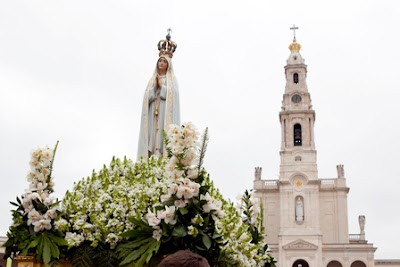 Important news posted by the official website of the Shrine of Our Lady of Fatima, in Fatima, Portugal:

In response to the desire of Holy Father Francis, the Statue of Our Lady of the Rosary of Fatima, venerated in the Little Chapel of Apparitions, will be brought to Rome on October 12/13 to be present at the Marian Day promoted by the Pontifical Council for the
Promotion of the New Evangelization. On October 13, next to the Statue of Our Lady, Pope Francis will make the consecration of the world to the Immaculate Heart of Mary.

Marian Day is one of the great pontifical events marked down on the calendar of celebrations of the Year of Faith which will bring to Rome hundreds of movements and institutions connoted with Marian devotion.

In a letter addressed to Bishop Antonio Marto, of Leiria-Fatima, the President of the Pontifical Council for the Promotion of the New Evangelization, Cardinal Rino Fisichella, informs that “all ecclesial entities of Marian spirituality” are invited to take part in this Marian day, a gathering which includes, on the 12th, a pilgrimage to the tomb of Apostle St. Peter and other moments of prayer and meditation and, on the 13th, a Mass presided over by Pope Francis, in St. Peter’s Square.

In that letter, Cardinal Fisichella wrote: “The Holy Father strongly desires that the Marian Day may have present, as a special sign, one of the most significant Marian icons for Christians throughout the world and, for that reason, we thought of the beloved original Statue of Our Lady of Fatima”.

You may also like the following posts:
Pope Francis and the Rosary

Email ThisBlogThis!Share to TwitterShare to FacebookShare to Pinterest
Labels: Our Lady of Fatima, Pope Francis