Praying for the Holy Souls in Purgatory: A Beautiful Lesson From Mother Teresa 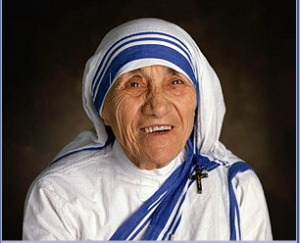 Pat Murnahan was coming back from a business trip to New York during the month of November, 1996.  He felt his presentations had gone very well and he felt relaxed as he sank back into his seat ready for the flight to London and then on to Dublin.  He had chosen a window seat so that he could sleep and not be disturbed by people coming and going.  As more passengers entered the plane and it began to fill up, he could hear the hum of continuous conversation up and down the aisles, mixed with the sound of bags being stowed in the overhead lockers.

After ten minutes Pat was beginning to snooze and the rhythmic sound finally lulled him to sleep.  But just minutes after he fell asleep he found himself sitting up fully awake.  He heard nothing and wondered what had woken him, then he realized there was complete silence in the plane.

He sat fully upright wondering what had caused the silence, he felt a slight tinge of terror, the first thing coming to mind was that terrorists were taking over the plane.

Pat turned hi s head to see what was happening and his mouth dropped open when he recognized the slight bent figure and smiling face that had caused the complete silence as she moved quietly up the aisle; it was Mother Teresa of Calcutta, with another slight bent figure in similar dress following behind her.

Both nuns were dressed in simple white habits edged in blue.  The familiar face, the wrinkled skin and the warm smiling eyes were instantly recognizable by everyone, from the youngest back packers to the eldest on board.  The plane was full of American tourists who had never been so close to this world renowned figure before in their lives.  An image they had seen on hundreds of television newscasts and on the covers of Time Magazine, on more than one occasion.

The two nuns stopped and Pat realized with a start, that the designated seats of this most extraordinary person and her companion were the seats beside him and he felt strangely unworthy as Mother Teresa herself was the one beside him.  As the last few passengers settled in and the flight prepared to take off, Mother Teresa and her companions took out their Rosary beads.   He noticed as they unfolded the beads that each decade was a different color.

They both closed their eyes as they immersed themselves in prayer and Pat stole a closer look at the unusual Rosary beads.  He noticed that the decades at the beginning were totally black but as the beads went on they got lighter until, at the end of the rosary, they were completely white.

After about three Rosaries Mother Teresa and her companion put away the beads and she took out a little red prayer book.  But before she opened the book she turned to Pat and asked him where was going.  When he told her Ireland and then having replied to her next question to confirm the ‘yes, he was Irish,’ he raised himself up in his seat more, no longer eager to sleep as he suddenly felt elated and privileged to be taking part in a conversation with probably not only the most famous person on the planet but also probably the holiest.  He was not ready for her next comment which showed that her knowledge of the Irish was from another era.

She said, “Well, you being Irish you must of course be Catholic and very prayerful.”

Pat felt embarrassed and didn’t respond.  Then he felt even more embarrassed, if that was possible, as she put away her little red book and took out her Rosary again, saying “As you are Irish we will say another rosary for you and the wonderful country you come from.”  Pat knew if he could see himself then in a mirror his face would have turned a very crimson red.

She told him, “Is there anyone in particular you wish to keep in prayer?”  Pat thought for a minute and he suddenly thought of his elderly grandmother who was bedridden and just clinging to life.  He knew she would really be taken with the thought of Mother Teresa praying specially for her, so he mentioned his grandmother’s name to Mother Teresa.

As she took out the Rosary he ventured to ask about the differing colors of the beads.  She explained they were called Holy Souls Beads and the changing colors signify coming from darkness into light.  We know as we pray a Rosary for the holy souls, Jesus brings many of them out of darkness into the light.  Mother Teresa asked Pat to take out his Rosary and they would begin.

Pat fumbled around in his pockets feeling extremely embarrassed as this saint in waiting expected hi to take out a Rosary, which she undoubtedly thought every Irish person carried around with them.  After a short interval Mother Teresa handed him her Rosary, which he was relieved about as he did not want to tell even half lie to this saint, as he was about to, saying, “I don’t seem to have one on me,” somehow implying that he normally did.

She produced another one for herself and he was also glad that they said all the prayers very quietly, so his mumbling was accepted as discreet prayer in unison with them.  He did, however, notice their petitions in between decades were for the souls in purgatory and did not include the name of his grandmother.

Afterwards, he asked the Reverend Mother why his grandmother’s name wasn’t mentioned in the petitions.  Her answer surprised him.

“When you pray for the souls in purgatory God will be so pleased with your unselfish prayers for those you don’t even know, that he will grant you your dearest wish, without even asking and sometimes maybe without you even knowing what your dearest wish is.”

Though Pat considered himself not very religious, knowing when he did go to church he went mostly just out of habit with his family and hardly ever prayed outside a church, he found these prayers extremely uplifting and he was in explicably happy afterwards, as he returned the Rosary to Mother Teresa.

As she smiled again at him Pat understood for the first time in his life what people meant when they spoke of a person possessing an ‘aura’ and, as his eyes connected with hers, a sense of peace overwhelmed him; he felt like when he was a little boy sitting by the river, with a warm summer breeze blowing through his hair, completely at peace with the world.

As they landed at Heathrow and alighted from the plane Mother Teresa was just ahead of him.  She turned back to him and asked, “Do you say the Rosary often?”  “No, not really,” he admitted. She took his hand, looked straight at him with her extraordinary gentle loving eyes and said, “Well, you will now,” and she pressed her Rosary into his hands.

Two hours later Pat entered the waiting area at Dublin airport where he was met by his wife, Alice.  “What in the world?” she asked, when she noticed a Rosary inhis hand.  They kissed and Pat explained the Rosary and described his encounter with Mother Teresa in the plane as being like a visit to heaven.  Driving home he said, “I really feel as if I have met a living Saint.”

The next day he heard his grandmother was up out of bed and seemed to have found a whole new lease of life.

Six months later Pat and Alice visited a close friend of theirs who they had just heard had cancer, with a short time left to live.  The friend told them that many prayers had been offered for her.  Then, after reaching into his pocket and taking out the special beads, Pat gently entwined Mother Teresa’s Rosary around the friend’s fingers.  He told her the story and said, “Pray for the Holy Souls, it may help you.”  Although the friend wasn’t Catholic, her hand closed willingly around the black and white beads.

Between one thing and another, Pat did not meet the friend again for a month.  This time her face was simply glowing, she hurried toward him and handed him the Rosary.

“I have carried it with me ever since and prayed for the Holy Souls whenever I got the change,” she said, and you won’t be surprised to hear that just this week I had another check up, the doctors could find nothing, the tumor was gone.  Pat, I am completely healed!”

Pat Murnahan vowed that day to get some more of these special Rosary beads, he knew they were not special in themselves but special in what they inspired people to do.  To help Jesus bring souls into the Kingdom would be reciprocated by that person receiving great graces from God.

With this particular friend of Pat’s not only did it bring physical healing to her but spiritual healing as well, for two years later she joined the Catholic Church.

Pat now promotes this Rosary telling people it can save lives and souls.
Posted by The Children's Rosary at 3:04 PM