St. Dominic Savio's Resolutions Made on his First Communion 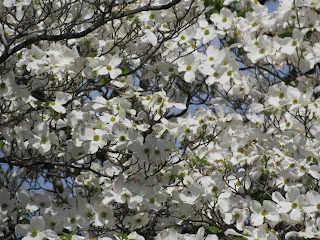 Recently I have been reading the biography of St. Dominic Savio by St. John Bosco. St. Dominic's Feast Day is today! As May is the month when many young children make their First Communion it seemed timely to highlight the day when St. Dominic's had his First Communion and some other stories of his life that give a glimpse into the soul of this saintly child.

Dominic was one of the boys who lived at the Oratory which John Bosco oversaw. Dominic's life was one of purity and this is why there is a picture of a tree covered in white blossoms shown above.

Indeed, this boy who died at the young age of 14 is a witness of holiness. Here I relate some beautiful stories of Dominic who is a remarkable example for children. Also included is a list of his resolutions written on the day of his First Communion.

Dominic lived between 1842 and 1857. In his biography, a story is told of young Dominic walking to school which was at least 2 miles away. One day an elderly person saw Dominic walking in the hot sun. The person asked if Dominic found the walk long and tiresome in the hot weather.
Dominic responded:
"Nothing seems tiresome or painful when you are working for a master who pays well". When asked who was his master. He replied, "It is God, our Creator, who rewards even a cup of cold water given for love of Him."

The Day of His First Communion
On the day of his First Communion he arrived early to Church. The doors were still shut. He knelt on the stairs outside the Church and said his prayers until they were opened. There were Confessions before the Mass began and then after Mass time for thanksgiving. Dominic who had been the first to arrive at Church was the last to leave.

"Resolutions made by me, Dominic Savio, in the year 1849, on the day of my First Communion, at age of seven
1. I will go to Confession often, and as frequently to Holy Communion as my confessor allows.
2. I wish to sanctify the Sundays and festivals in a special manner.
3. My friends shall be Jesus and Mary"

St. Bosco relates that these resolutions were not simply written and forgotten but rather they were a guide to Dominic throughout his life.

Today on this beautiful Feast of St. Dominic Savio may we ask for his special intercession. In particular, he is a saint to whom young children may find enjoyment in learning more about and asking for his help.

Other Posts You May Enjoy: