Flowers for Our Lady of Guadalupe 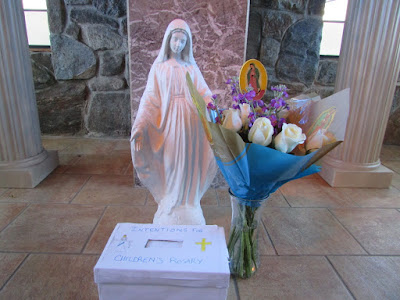 We had a wonderful surprise today. While the children and I were at Mass this morning my husband went to the store to pick up some flowers for the Children's Rosary this afternoon at St. Peter Claver.  When he picked us up from Mass he had a big smile. He was surprised to find at our local Stop and Shop grocery store a bouquet with a wrapping that said Our Lady of Guadalupe. There was also a sign in the flowers with an image of Our Lady of Guadalupe. With the Feast of Our Lady of Guadalupe Monday and the Feast of Juan Diego yesterday the special flowers seemed perfect for the children to bring for the Children's Rosary this afternoon. The surprises would continue.

We had a new child, Juan Pablo (John Paul), join us today for the Children's Rosary.  He is very young but he goes to daily Mass with his parents and my children had invited him. It was amazing to see how my own children lit up to have John Paul there.  As his parents are from Colombia and speak Spanish we had the idea that maybe we could pray most of the Rosary in Spanish today. Three mysteries were prayed in Spanish and two in English. We happened to have both our Children's Rosary books in English and Spanish with us so it worked out perfectly.  As it appeared that Juan Pablo was most accustomed to Spanish being spoken, he seemed much more comfortable when the children were praying in Spanish.

You may be wondering how it is that we were able to pray the Rosary in Spanish.  This has been something that has taken some time. Several years ago we began to learn the prayers in Spanish. Our hope was that if we were to meet people that were Spanish speaking we could pray with them.  All the months of praying the Rosary in Spanish brought fruit today as we could finally have an opportunity to pray with those whose native language is Spanish. 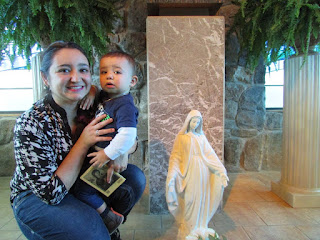 Here is a picture of Juan Pablo (pictured right). He was able to place a rose at the foot of our Lady at the end of the fifth decade. He is too young to say the prayers but his presence was cherished by all of us.

We have seen children as young as Juan Pablo grow watching the older children and slowly through imitation they begin to become more and more comfortable kneeling, placing the roses and then very soon saying the prayers.  Even today as this was Juan Pablo's first time at the Children's Rosary he was watching everything very closely. In these tender hearts early seeds are being sown of devotion and faith. Juan Pablo's mother and father said they would be bringing him to our next meeting in January.