Today is the Solemnity of Mary Mother of God.  It also is the Marian Feast which we chose to end our 33 Day Consecration to Jesus through Mary.  Like many members of the Children's Rosary we said our prayers as a family. Today our plan was to attend the 9AM Mass for which Alina my 13 year old daughter was altar serving.  I also happened to be assigned to lector as well.  After Mass we had arranged to join with other local members of the Children's Rosary to say the Consecration prayer. 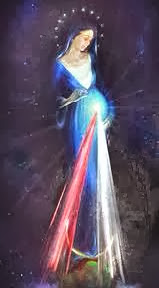 My daughter, who we adopted with her biological brother from an orphanage in Kazakhstan almost 5 years ago, is now 13.  She has many cognitive disabilities including short term memory loss.  She has been an altar server for a number of years however this has always been a struggle for her.  Many have come up to her with a smile and asked if it was her first time serving as she is often somewhat unsure of all the steps.  Yet she has persisted and not given up even though sometimes she feels embarrassed.  One thing which has been extremely intimidating for her are the bells.  She has on occasion served alone and from the pews I would raise my arms when it was time to ring the bells but she always knelt like a statue and would never try to ring them.  If she was with another server the other server always rang the bells.

Today seemed to be unfolding in its typical fashion.  There was some confusion about the water which brought the priest over to the side table.  I was thinking that I should write to our Pastor and explain Alina's disability to him so he would understand why things were always somewhat confused.  Then something happened that took me so by surprise.  The priest said, "Take this, all of you, and eat of it, for this is my body, which will be given up for you." The bells rang but it was Alina bent over ringing them.  This time, it was I that was like a statue, watching in disbelief.  Then the priest raised the wine and again Alina bent over and rang the bells.  After she finished she looked at me with a big smile.  The rest of the Mass I was somewhat in shock.  After Mass we went over to the statue of Mary with some other members of the Children's Rosary including two boys from the Children's Rosary group at St. Peter Claver Church.  One of the women began singing Gentle Women.  The children knelt at the rail.  We then all together said our Consecration prayer to Jesus through Mary.  Then each person brought a flower and placed it on a small altar under the statue of Mary and the baby Jesus.

In thinking about what had transpired I was struck by something.  Alina had been for years frightened to ring the bells at the sacred moment of consecration during Holy Mass.  On the morning of the Feast of Mary Mother of God and the final day of the 33 day Consecration to Jesus through Mary,  Alina had found courage.  The other altar server who was with her, as I would discover, had encouraged her this morning to ring the bells and said he would help her if she needed help.  Our Lady, through the hands and words of others, had found a way as a mother to support this child and help her more perfectly honor her Son.  This to me seemed to sum up the whole consecration process.  Mary did so gently, not with reprimands as I often find myself doing as a mother, but through gentleness and kindness.  How wonderful that the song Gentle Women was chosen to sing this morning for truly Mary is a gentle and loving Mother.  She takes our hand and gives us courage when we are frightened,  she steadies us and points us always toward her Son, Jesus that we may more perfectly honor Him in all things.

photo courtesy of http://www.pamphletstoinspire.com/#!gentle-women/c7ed
Posted by The Children's Rosary at 11:17 AM